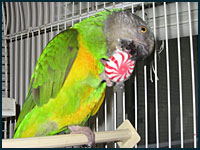 In August 2009 I was eagerly awaiting a visit from one of my regular ‘in-house’ petsitting pets, Pico the senegal parrot. Her owners travel often and our home has become Pico’s second home. She enjoys her time here, cheerily greeting or bidding adieu to whoever is coming or going in our house. Nibbling on her favorite foods: hot chili peppers, Trader Joe’s biscotti, cardamom seeds, Ritz mini peanut butter crackers. Chattering away in our dining room, hanging out on the windowsill looking outside. She loves people and would rather spend time outside of her cage than inside.

Pico’s owner Malathi was set to go away for a long trip to Australia and a few days beforehand she sends me an tearful email.. Pico had flow away! She lives in a forest-y area in Northern California called Ben Lomond. Evidently she was moving Pico from one cage to another and a noise made Pico flutter.. and her wings (which have to be clipped regularly to keep her from flying) were evidently long enough to give Pico some height.. and up up up she went high into the trees. She could see her wayyyyyy up high, and called for her to come down, but Pico was afraid because she doesn’t remember that she can fly sometimes. So when she made an attempt to leave the high tree she was in… she fluttered again and went higher and higher until finally they couldn’t see her anymore. Malathi was heartbroken, as she has a very strong connection with Pico. She had little hope that Pico could be found, or would even survive in such a vast forest of trees filled with potential predators. Once Malathi told me about this I was quite upset. Pico is more than a petsitting pet to me.. she’s like family! Being the pet-loving people that we are, my mom and I decided to drive to Ben Lomond the next day to help Malathi look for Pico. I printed signs on my computer with our contact information, hoping that someone might happen to find her.

On Saturday morning we drove one hour via highway 17 to get to Ben Lomond. Once we arrived we got in the Malathi’s car, and we proceeded to hop out every block and posted signs and taped ‘missing!’ notes to people’s mailboxes. We also drove around the main part of town and talked to people about Pico, hoping to at least get the word out. Since Malathi was leaving on Monday for Australia we didn’t know if she’d be found by then, but with my phone number (as well as my mom’s) on the signs if by some miracle someone found her at least we could make the trip back to Ben Lomond to collect her. There is a small river near where they live and we drove to the other side of the river to distribute posters over there, since that was the direction Pico seemed to be going when she flew off. We talked to a few neighbors as we diligently taped more signs around. Eventually we went to one house and a lady looked at our sign and said ‘hey, our neighbor found a bird like this the other day’ ! We went to that house, nobody was home, but the neighbor called her on her cellphone and told her that we were there looking for a beautiful green, yellow and gray parrot. The woman drove home immediately… we greeted her when she pulled in… she brought us into her house and brought out a cage. It was our Pico! Malathi cried tears of joy and my mom and I were so happy. Pico evidently had spent 3 days in the wild before she landed in this woman’s backyard. Her husband was watering plants and saw this parrot walk up to him and start to gently peck at his feet 🙂 They knew she was special because she didn’t try to fly away.. she wanted to be with them. That’s our girl 🙂 So they put her in a cage, intent on putting up ‘Found Parrot’ signs that very weekend.

When we started our search party efforts we really thought it was a longshot but wanted to at least try… my mom felt we were going to find her… she just FELT it…then finally something took us to the right road… and then to the right house… and the people who found her just happen to love animals….we were shocked and awed by the outcome.. so was Pico.

Later on Malathi wrote me a thank you note:

“I don’t have words that can express my gratitude. Thanks so much for the help. I am so very happy.”